This is the fourth day I’m taking up Patti’s pilotfish challenge: Lens-Artist Photo Challenge: #66: Filling the Frame. In today’s post I’m showing how “negative” space can indeed be negative in the sense that there is no image in it, but sometimes a larger negative space can show off the subject more effectively than a “larger object/smaller negative space” would.  And sometimes the two choices show off the subject equally well, but the two versions of the photo end up looking like two entirely different photographs. The differences in how much of the grey background is included shows two different ways to “Fill the Frame.”

Here are my two examples. The flower subject is not only the same in both examples, but they are, in fact, the same photo. I used my Nikon DSLR with a 105mm macro lens.

The first photo is closely cropped.

The second photo is actually the original one – no vertical cropping was done.

I happen to like both versions, but I would chose a different one depending on what I was planning to do with the photo. If I was wanting to use the flowers as a pattern for a border, I would obviously go with the top version. I would also chose the cropped version if I was wanting a long, narrow photo to hang on the wall.

But the original photo before cropping – the bottom one – has it’s own charms and tends to be my favorite. By allowing more of the soft grey background to show, this larger version has an element of serenity to it that I love.

So for me, the answer of how much negative space to include on this particular photograph depends on where and how I would be planning to hang the picture.

But I would very much like to know your opinions. So leave some comments. The more, the merrier!

This is my second day taking up Patti’s Lens-Artists Photo Challenge #66: Filling the Frame over at Pilotfish. She has encouraged us to include shots of before and after we filled the frame. In some cases, as I’ve mentioned before, filling the frame has to happen in post production because the photo that we have is, well, the photo that we have. When you are photographing wildlife, there’s no do-over.

This also was my first time out with my new mirrorless Olympus OM-D E-M5 Mark II camera, with a Zuiko 75-300mm lens. (Yes, I finally saved enough pennies! More on the new camera in a future post.)

Here is the original shot of a Snowy Egret.

The egret is too high in the frame because I didn’t have my tripod and my hands tend to wobble. And in this shot, since I was too far away from the egret even with my telephoto, the eye is drawn to the water and the reflection – not what I am trying to accomplish. The exposure is also too dark, given the  sun’s position and the resulting shadows.

Here I’ve cropped it down, as well as lightening the exposure and then increasing the color saturation to compensate. 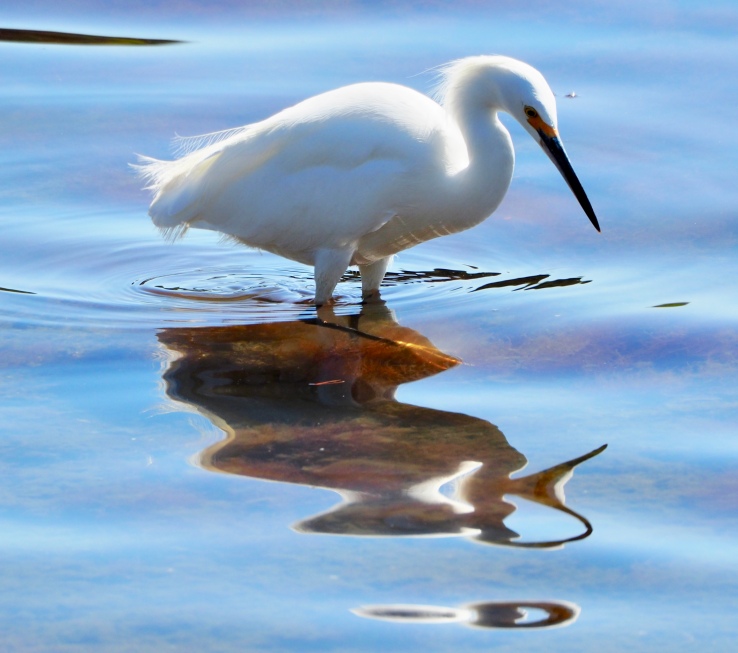 In this, the eye of the viewer is drawn as much to the reflection in the water as to the egret. Better, but not ideal. The exposure is better, but there’s still too much shadow on the egret, making the lovely detail on his face and beak difficult to see.

So I did some more cropping and further lightening of the exposure.

Now, the egret fills enough of the frame that there is no question as to the central focus of the photo. At the same time, I have kept enough small details in the shot so that your eye should linger. The curve of the shadow on the right is the curve of the underside of the egret’s neck. That should draw your eye back to the incredible coloring of his eye and beak. Now look at his body. Do you see the ruffling of his delicate feathers on the back of his head and his tail? Is the air breezy or calm? Do you see the ripples of water reflected in stripes of light on his chest? And I’ve lightened the exposure of the water just enough, but not too much, so that I haven’t lost the places where you can see through the water’s surface to the mud beneath, adding a sort of impressionistic effect to the water so it’s not just one shade of blue.

And somehow, through pure luck, the position of the sun, and the angle of my camera, you can see under the water’s surface in the egret’s shadow. Can you find his refracted black leg and orange foot? You might have noticed them in the first two photos, but now they are right there, almost, but not quite, stepping out of the photograph.

At least, that’s the effect I was aiming for.

I don’t actually have a macro lens yet (I’m saving my pennies) so I have to use my 200mm telephoto, then enlarge and crop. (The image would have been clearer if I had a macro lens.) As a result, I didn’t even know I had captured this beauty. I thought I was just taking a picture of a beautiful flower that I could enlarge to show the detail. As I was looking at this photo in my iPhoto library, I noticed something was sitting on the bottom portion of the flower. I wasn’t even sure what it was at first because I was just browsing thumbnails. I clicked on the photo to see what I could do with it – whether or not I could edit it into a usable photo and voilà! C’est merveilleux! And an unexpected grace.

*This, by the way, is a butterfly, not a moth. You can tell by looking at three things.

I am spending hours a day discovering how cropping a photo can profoundly alter what the viewer sees. I’m not taking a course, it’s just one of the next two skills I’m working on. (The other being color. See Friday’s post below). And I’m finding it addicting. I’m staying up way too late hooked into seeing how changing where and how I crop and what I therefore leave in the photo and what I take out can alter a photograph so radically.

I’m going to demonstrate a rather straight forward example.

Thursday when I was out, I only had my  iPhone with me. It’s an older model and  is a pretty good basic on-the-fly tool to have. But I can’t get any depth of field when I’m right up close to the object the way I could with lenses on my Nikon D5300. However I still wanted to capture the picture of the seed pods below.

The first thing that is obvious is that there is WAY too much busy background involved because I couldn’t blur the bare branches. So I started cropping to see if I could rescue the photograph. My first attempt was something like this, because I also liked the color of the leaves and was trying to include them: 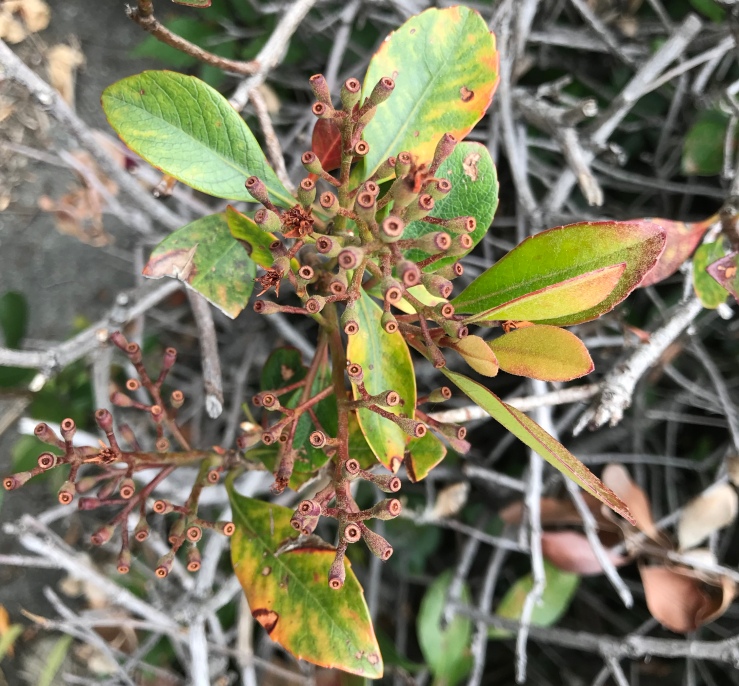 That was better, but was still going to be a photograph that I needed to discard. But I’m stubborn. Plus I’m trying hard to learn a new skill. So I kept cropping further and further in toward the center and then tweaked the color to bring out the contrast between the seed pods and the leaves. Eventually I ended up with the photo below. It’s not the photo I would have been able to take with my telephoto lens, but it is now at least a photo that emphasizes the seed pods. It does have its own charm. And I didn’t have to consign it to the digital dust bin.

*Please note that you can only enlarge the details in photos taken on your phone if you have set it to the highest resolution possible. That means that each photo takes up a lot of memory, but the way around that, at least using an iPhone/computer is that the photos are stored on your devices at a lower resolution, but when you open each photo up, the higher resolution is automatically temporarily downloaded from the iCloud.